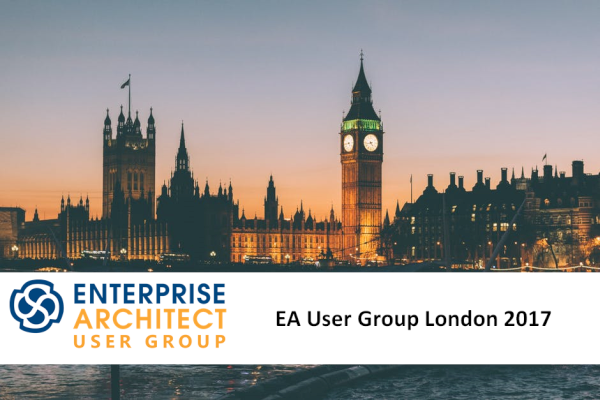 This article is the second part of my feedback on the EAUG London 2017 event, covering a full day of presentations, case studies, and user stories which took place on Friday, May 19th. Click here to see the first part on this article with the training day. It illustrates the quality of information that has been delivered if you couldn't make it this year.

As shown on the agenda below, the day started with a keynote followed by 5 sessions, each time with a choice between 3 topics. 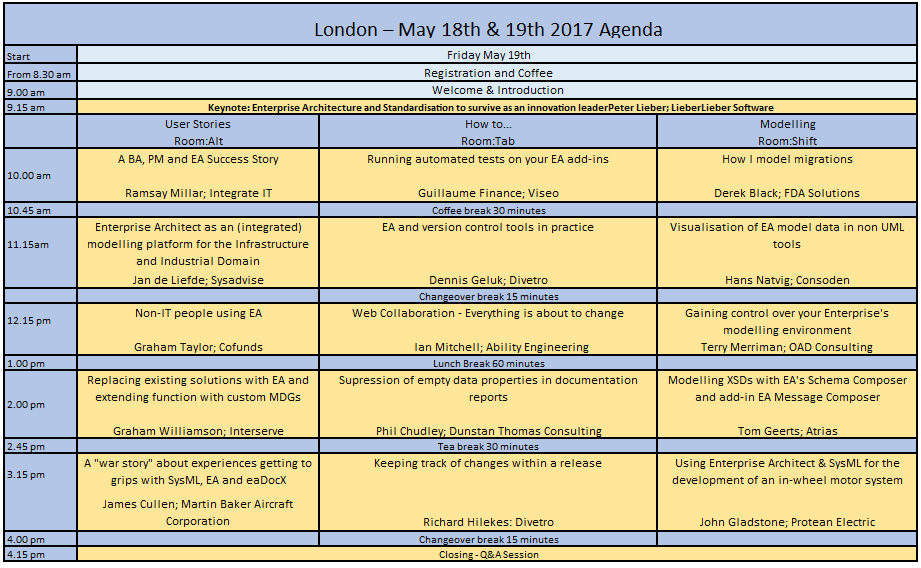 Below is a feedback on some of the presentations I followed on that day. I also cover my presentation about eaTests, an automated tests solution for Sparx EA add-ins and scripts.

The keynote this year was run by Peter Lieber, from Sparx Systems Central Europe (Austria).
Peter shared his experience and recommendations when introducing a modelling approach within a project or company:

Peter then focused on safety relevant systems e.g. trains, cars, aircrafts, medical MRI, etc. involving both complexity and safety. Safety is often subject to standards such as ISO 26262 for Road Vehicles Functional Safety. Looking at the challenges that need to be solved based on the ISO26262 standard, the modelling approach is considered to be the only sustainable option. This is supported by the fact that modelling makes it possible to maintain elements (e.g. requirements, components) and models (diagrams) that are all connected via traceability, coined as the model intelligence.

To enable adoption by Systems Engineers, the chosen language (SysML, UML) can be extended e.g. via a UML profile and its stereotypes. For instance the ISO 26262 ASIL levels (Automotive Safety Integrity Level) can be implemented in the system's model blocks through a range of colours.

Where diagrams are not always appropriate, details can be extracted and published through the means of Excel documents, e.g. via a Decision Matrix.

The final idea covered by Peter is to use Enterprise Architect as a platform that provides:

Automated tests solution for add-ins and scripts in Enterprise Architect

My presentation was aimed at introducing an automated tests solution for EA automation scripts and add-ins, based on a personal project that I worked over the past months.

Since 2015, I maintain and share a free utilities add-in: eaUtils (www.eautils.com). eaUtils is aimed at saving time in specific scenarios involving sorting a wide array of elements within the model, or generating the alias value for elements according to their layout in a diagram.

The enhancements that I identified throughout the time, in addition to the feedback and requests received from users led to an increasing complexity level. Even if eaUtils is published as a free tool, a good level of testing and quality is required for the target users. Time consuming tests prompted the need for an automated tests solution with the following objectives:

I came up with the following business class diagram to define the test structure:

Moving to the design, I created an XML Schema model and generated the XSD file with EA to structure the XML test definition files. Having implemented a first working version of my automated tests in eaUtils, I could use it as illustrated below:

The following illustrates the EA test project structure with packages that contain data sets, test step elements, and the automated tests execution process (load the tests description from the XML file, and for each step, load the settings, call the add-in method with the provided parameters, check the post conditions, and generate the results).

Generated sequence diagrams are aimed at reviewing results and keeping a history of run tests. Here is an example:

I ran eaUtils addin automated tests in Enterprise Architect via the first part of my demonstration, having only as a demo effect a spilled glass of water which did not reach my laptop. Thankfully no IT related demo issue.

The second part of my presentation covered the next step forward by making this solution available for other add-ins and even scripts. There are numerous EA automation scripts and add-ins out there. Most of them are specific to a project and therefore not shared with the community, whilst the remaining ones are released as open source, free, or commercial tools. Note that EA add-ins are listed by Sparx Systems on their third party extensions page.

In order to integrate this automated tests solution with other addins and scripts, I selected the following candidates:

The tasks that followed were:

As a result I successfully ran tests on one hoTools feature, (see a related article here), a script from Geert, and 2 of my scripts. These were illustrated in the second part of the demonstration.

This study has led to a new solution called eaTests that has a dedicated site (www.eatests.com). The foreseen enhancements for eaTests library are mainly linked to the type of tests to carry on post conditions.

The aim of an Enterprise Architecture was to move away from paper-based processes and achieve a digital construction. The audit of existing services, locations, customers, processes, applications, data, and technologies quickly led to the need of a modelling tool. Sparx Enterprise Architect successfully fulfilled this need, delivering the following:

Graham shared the meta model via the selected Archimate 3.0 relationships and elements, followed by examples of Archimate 3 stereotypes to handle additional properties. All Interserve stereotypes were made available via a custom toolbox.

EA 13 Model Validation feature was used to make sure that relationships between elements were valid according to a set of rules.

Graham then talked about customizing EA diagrams to provide a suitable view for stakeholders:

It was interesting to see a practical use of Archimate plateau elements as illustrated below (definition from the Open Group: "A plateau represents a relatively stable state of the architecture that exists during a limited period of time").

As relationships couldn't be connected to an Archimate plateau element whereas this level of traceability was expected, the solution involved custom searches based on SQL queries with results grouped by Plateau. Search results enabled Interserve users to review each Plateau or architecture state content.

A number of topics remain to be addressed in this approach including a web based interface, Sparx Cloud Server, etc.

I was looking forward to this presentation as I'm currently involved in an MBSE (Model Based Systems Engineering) project in the automotive industry for ISO 26262 safety compliance.

John Gladstone works for Protean Electric Ltd, a UK based company that develops in-wheel electric motor systems for hybrid, plug-in hybrid and battery electric light-duty vehicles. John's presentation provided an interesting feedback on the challenges that have been addressed with SysML and Enterprise Architect models.

As a result SysML sequence diagrams had the driver and gremlin lifelines as the actors, and the electric vehicle lifeline in the middle with all interactions.

Another BDD diagram was used to illustrate a complete view of the modelling needs for a motor system:

John shared his recommendations on the literature to read about SysML, including:

The structure of the framework model was described as follows:

Guidelines and diagrams describing the process to follow according to the methodology have been defined for each viewpoint.

To help understanding and improving this modelling environment with frameworks, processes and a methodology, an example model has been defined. This worthwhile exercise is based on an example system:

Throughout this 2 day event, I had the opportunity to meet great people. It was very interesting to share ongoing work and questions around EA, whether the context applied to software projects involving analysis and design, systems engineering with SysML and MBSE, or enterprise architecture with UML or ArchiMate. It was very nice catching up or meeting users that I know via Sparx forum or other online means throughout the year, giving an opportunity for a face to face discussion.